I am an archaeologist, but started my professional life as a visual artist. Despite my current career choice, or “life journey” as I would call it, I remain an artist at heart and it has permeated my selection of archaeological topics that have been the focus of my research for 6 years now. 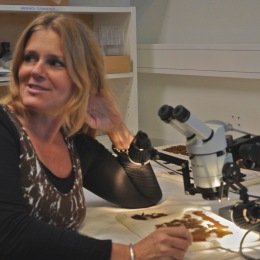 Archeologically, I work on women- women’s roles in the Norse colonies of the North Atlantic (Iceland, Greenland, and the Faroe Islands) and explore who they were and how they expressed themselves through the textile arts. Wool was a very valuable commodity in the North Atlantic and due to a lack of tradable resources wool eventually became, along with fish, one of the principal commodities available. In Iceland this cloth became the only currency in use from the 12th century to the 16th century, used to pay taxes, tithes etc. It was legally regulated by men but made by women. It was also traded with Norway and northern Europe in exchange for goods that were lacking in this bleak North Atlantic environment. In Greenland, textiles took another direction, and rather than becoming a currency were used as household commodity with increased climate cooling due to the Little Ice Age in the 14th century. Eventually in the Greenland colony (which eventually disappeared in the mid-15th century), women tried to stretch resources, mixing in other fibres with wool, and changing the traditional textile technology they brought over from Iceland into something unique and Greenlandic.
Behind textile work were the women faced with challenges of economic hardship, trade, and climate change. In Norse societies, weaving and spinning were linked to fertility deities, magic, death and birth and it was considered taboo for men to approach the weaving huts where women secluded themselves during the Viking Age. By looking at textiles and their structure, by looking at the archaeology in which they were found I have been able to bring women, frequently absent in the archaeological record, to the forefront presenting their decision, their choices, their actions.

The textile work that I have been focused on for the past 6 years has permeated my art, and in the  process of these analyses I have  taught myself to work on the warp weighted loom- a very ancient Neolithic loom that was used across northern Europe. By teaching myself to weave it has brought me back to my initial passion: Art and have begun exploring concepts from my scientific research via visual medium. In the near future I will be exploring themes related to the sagas and interpret them through my weaving in future blogs. Prior to textile work, I also worked as an archaeological illustrator of Viking Age artifacts, here are  few examples from Iceland. 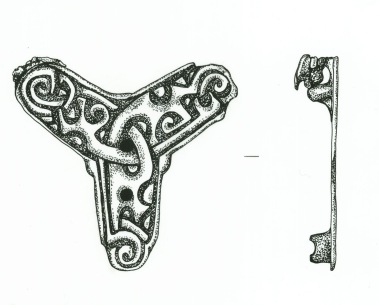 I have also worked with watercolors, pen and ink, and chalk, drawing those haunting Icelandic landscapes.

In the past I have worked in printmaking, metal work, and painting but at the moment the textile arts are my focus. You can contact