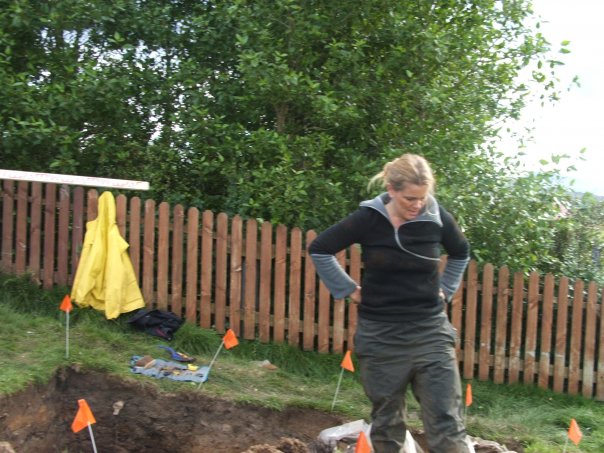 Michèle Hayeur Smith is an anthropological archaeologist with research interests in gender, textiles, dress, adornment and material culture studies. She has fieldwork experience in Iceland, and North America. Her doctoral research, conducted on jewellery and dress from Viking Age Icelandic burials, looked at items of dress for clues about the projection of social and cultural identity. Her postdoctoral research addressed these same theoretical issues, but applied to Aboriginal populations along the Gulf of the St. Lawrence prior and after the contact period. This project was a part of the Great Lakes Research Alliance for the Study of Aboriginal Cultures (GRASAC), organized by Dr. Ruth Phillips at Carleton University.

More recently she has returned to the North Atlantic and Iceland and is currently working on research projects on gender and the production and circulation of textiles from the Viking Age to the early 19th century. NSF Arctic Social Sciences (Award no. 102316) “Rags to Riches: an Archaeological Study of Gender and Textiles in Iceland AD875-AD1800” examined curated archaeological textiles collections from roughly 34 Icelandic sites and has offered new insights into gender, textile production and trade in and out of Iceland, weaving technologies through time, as well as dress practices throughout the medieval period. This project has hopefully brought women’s lives and women’s roles in the Icelandic economy, household organization, regional politics, and culture into the forefront.

In 2013 She was awarded a second grant from the National Science Foundation (Award no. 1303898 ) “Weaving Islands of Cloth: Gender, Textiles and Trade across the North Atlantic, from the Viking Age to the Early Modern Period” expanding upon the previous grant and carrying a comparative, 1000-year examination of textiles as primary evidence for women’s labor and roles in some of the Norse colonies that expanded from Scandinavia across the North Atlantic in the 9th century AD and developed, over the following millennium, into the modern nations of Scotland, the Faroe Islands, Iceland, and Greenland.

2016 (in press) “Ethnicity and Cultural Influence in Dress from Scandinavia and the North Atlantic,” in Medieval Volume I, Berg Culture History of Fashion, edited by Sarah Grace Heller; Berg Publishing, Oxford.

2016  Book review of Silk for the Vikings by Marianne Vedeler,(Ancient Textile Series 15.) Oxford and Philadelphia: Oxford Books, 2016. In Speculum.

2015  “Textiles and Jewellery”, in Bundled up in Blue: the re-investigation of a Viking grave, exhibit catalogue from the National Museum of Iceland, Reykjavik.

2016  “The Heddle Rods Are Blood-Soaked Spears”: Life, Death, Fate and Fear: Female Embodiment Through Weaving In Viking Age and Medieval Iceland. Paper to be submitted to Fear and Dread in the Archaeological Record, edited by Chris Wolf and Kevin P Smith.

Links: Many articles are available for download on Academia.edu